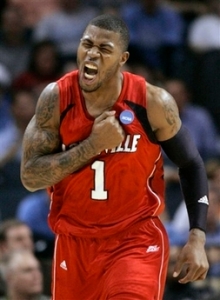 Terrence Williams became the first Louisville men’s basketball player to garner AP All-American honors since Reece Gaines in 2003, as he was named a Third Team All-American by the Associated Press.  Williams, the emotional leader of this year’s UofL team, became the first player in school history with more than 1,500 points, 900 rebounds, 500 assists and 200 steals.

Junior Earl Clark, who averaged 14.2 ppg this season, was named an All-American Honorable Mention.  Clark is expected to be a lottery pick in the upcoming NBA draft.

Other players of interest who were honored were Jodie Meeks who was named to the second team and was Kentucky’s first All-American since Keith Bogans in 2003, as well as Western Kentucky’s Orlando Mendez-Valdez who was included in the honorable mentions.  Pittsburgh’s DeJuan Blair was named to the first team while Sam Young received a spot on the third team.  Other Big East players to gain honors were Notre Dame’s Luke Harangody, Connecticut’s Hasheem Thabeet, and Marquette’s Jerel McNeal who all made the Second Team.

UConn’s Jeff Adrien and AJ Price, Pitt’s Levance Fields, Jonny Flynn of Syracuse all joined Earl Clark in receiving honorable mentions.  Oklahoma’s Blake Griffin was the only player on the first team to be named a unanimous selection.

Williams how now joined an elite group of Louisville Cardinal’s to be named to the All-American team.  This includes Wes Unseld, Reece Gaines, Darrell Griffith, Pervis Ellison, DeJuan Wheat, John Turner and Butch Beard, among others.  As of now, he is projected to be a late first round pick in the 2009 NBA draft.

Take care Terrence, we’re sure going to miss you.

This entry was posted in Uncategorized. Bookmark the permalink.